Think of a conversation – with someone you care about – where you just got stuck. Maybe it was an argument about affirmative action with your uncle at Thanksgiving. Maybe it was a member of your congregation. Maybe it was a partner. You stumbled in a moment of heated disagreement and just couldn’t figure out how to get back on track, to hear and be heard in a way that was constructive for both people in conversation. This was the opening question posed by Professor Jason Jay, based out of the MIT Sloan School of Management, to a packed house at General Assembly on October 11th during Boston’s weeklong celebration of innovation across sectors: HUBweek. 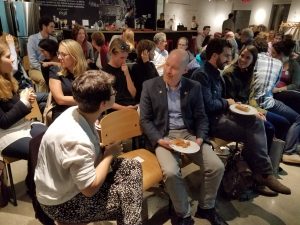 Using an online polling tool, he asked the audience to reflect on some conversations where we’d gotten truly stuck. From immigration to charter schools, Israel-Palestine to taxation, income inequality to fake news, there was no shortage of topics that seemed to lead to impasse, broken conversations and, ultimately damaged relationships. Trump, unsurprisingly, was a common mention. Even apart from the politically divisive topics that emerged, Jason brought the conversation close to home – and emphasized that how we approach difficult conversations, not necessarily the content that comprises them, is what most significantly shapes their trajectory.

He recalled a conversation like that with his wife – emerging from the seemingly innocuous infraction of finding a basement light on. Jason, a committed sustainability advocate, might demand, “Who left the light on?” Now think, he prompted the amused audience: what does that statement do? “It makes her feel defensive,” said one attendee. “It assumes she values sustainability and energy as much as you do,” offered another. Beyond simply a household disagreement, these gaps in understanding, Jason argued, are what prevent us from having conversations – and ultimately, from building movements – that honor one another’s perspective and humanity beyond our assumptions about the intentions of others. We have power, Jason argued, if we have these conversations intentionally.

To have an intentional conversation requires contextual specificity. In other words, we can’t just say we want to have a more constructive conversation about climate change. We have to actually plan that specific conversation with the person we plan to have it with (not even a vague “Trump supporter” will do, he warned), and lead with a foundation of mutually held care and concern. When that “relational context,” as Jason put it, is missing, disagreements are more likely to escalate into standoffs with both sides digging in. He had us reflect, in an interesting exercise, on what we actually gain when conversations go haywire, and some pretty honest responses emerged. We felt the immediate relief of righteousness, the adrenaline rush of defensiveness, the happy cocoon of never having to question our own point of view.

These tough conversations, he noted, have high stakes that require us to build a muscle of courage, for starters simply enough courage to broach that tough topic with someone with whom there are high stakes. Jason made the important point that while it’s easier to just let positions and arguments define the parameters of a conversation, if we want to move beyond gridlock, we have to actually bring our own vulnerability and life experience to the topic at hand. In Jason’s case, why does he care so much about energy and the environment? Sure, it’s about global warming…but it’s also about falling in love with the Indian paintbrush flower in his hometown in Colorado, and coastal cities like Boston, and wanting to care for and protect these places.

When we’re able to understand the critically important backdrop of context (whether that’s a transformative life experience or simply the news source someone’s most exposed to), we can examine how we ourselves are being in conversation – not just what we’re saying. What assumptions are we making about other people’s values, or about how other people are understanding our own values?

After practicing a new dialogue with our imagined partner in conversation, Jason reinforced that these skills for breaking through gridlock are what can foster bolder and more inclusive social movements, by connecting the personal with the organizational and ultimately the collective. The thread that connects all of those conversations, if you will, is the fear we each hold of admitting our vulnerability and sitting with discomfort while maintaining space for respect and individual experience. What we can all agree on, Jason concluded, is that few people in this country are happy with its current level of polarization and being present, even when it gets challenging, for conversations across deep differences, is the only way we will heal.