On March 30th, the Civic Series welcomed Erik Fogg and Nathaniel Greene, co-founders of MidTide Media and leaders the Something to Consider Movement, with the mission of rebuilding the lost middle ground in U.S. politics. In 2015, they published, Wedged: How You Became a Tool of the Partisan Political Establishment, and How to Start Thinking for Yourself Again, which uncovers the root causes behind growing political polarization in the United States. 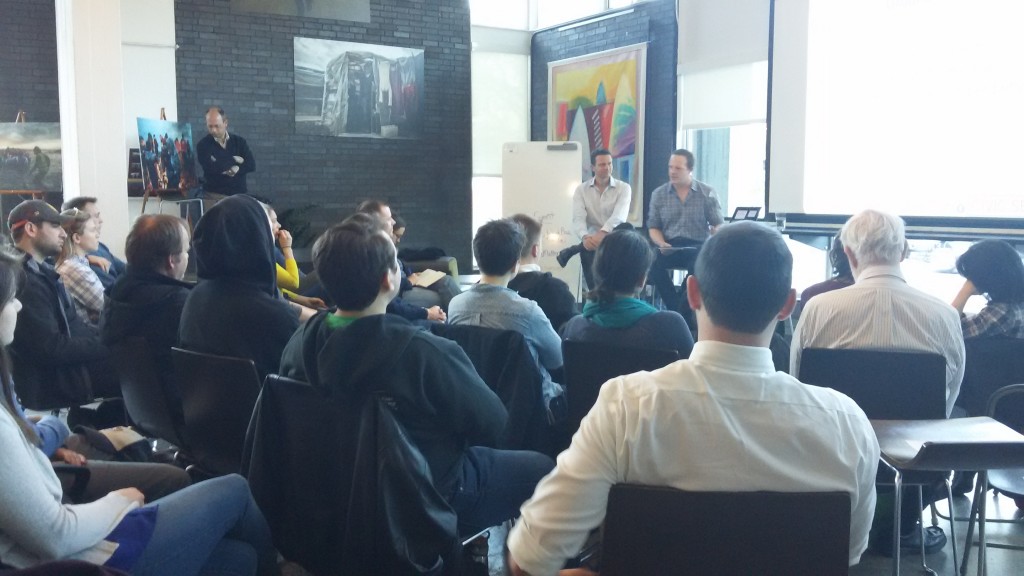 At the start of the evening, Laur introduced Erik and Nat to the 40 attendees gathered at WorkBar Cambridge, and set the ground rules. There are no dumb questions, this is not a debate, and during Q and A, everyone gets one question to start. These ground rules, presented at the beginning of each event, facilitate the intention of the Civic Series: to give all those in attendance and opportunity to learn and engage actively with relevant current issues, without fear of embarrassment or “getting it wrong.”

After Laur handed the evening over to Erik and Nat, the two presenters set out their particular intentions to answer the following questions: How do we measure political polarization? What is driving it? And, what can we do about it? To launch the conversation, Erik posed a series of polls to the group. What did we, in attendance, actually know about public opinion on issues pushed to the fore by the media and political candidates? When asked what percentage of people in the U.S. we believed were pro-choice vs. pro-life, our answers (as a group) varied widely. Some thought 30% to 30%, while others guessed totals closer to 60% to 40%. In reality, the numbers show that almost 50% of Americans identify as pro-choice and almost 50% of Americans identify as pro-life.

Over the last 20 years, fewer people have identified as pro-choice, and more people have identified as pro-life. However, people’s opinions on concrete policy questions have remained largely the same over the same period of time. Though almost 50% of Americans now identify as pro-life, only 19% think abortion should be illegal in all cases. Backed by this and other data, Nat and Erik make two assertions: that people’s claim of a particular identity has relatively little to do with actual policy opinions. Additionally, while an identity, like pro-choice or pro-life, might remain absolute for individuals, once they are presented with specific questions about their opinions on policy, their stances become more nuanced. The data clearly shows that not even half of the Americans who call themselves pro-life believe abortion should be illegal in all cases.

For Erik and Nat, it’s the profound and immovable identification with a particular identity, political party, or “tribe” that is the crux of the issue. As political candidates campaign, they’ve found that by presenting the issues as binary, and framing the opponent as evil (and “a threat to the fabric of the nation”), they are more likely to win an election. This of course feeds (and is fed by) polarization; those who lean far left and far right are the most politically engaged and the most likely to vote. If candidates want to keep winning, they must continue to foster this polarization, and what Nat and Erik call the “vicious wedging cycle.” The voting patterns of our Congress clearly reflect this trend. While 50 or 60 years ago, Republicans and Democrats would sometimes vote together on issues, now they hardly ever do. The political identity has become far more important than the policy questions themselves. All political speech, from candidates’ stumps to memes shared on Facebook, appeal to those who already agree and reinforce the power base on both sides, leaving those in the middle to either “speak to an empty room” or disengage entirely.

After speaking for about a forty minutes, Nat and Erik took questions and facilitated a lively Q and A session. One attendee asked: but why is political polarization bad? Nat conceded that it might not be all bad. But, it is harmful in a couple of key ways: the fear and hatred between parties is inherently damaging to our social fabric. Additionally, opposing parties are hardly able to work together to solve important social problems, like the diminution of Social Security.

Another question was, what can we do? Nat asserts that we should start with ourselves. No matter the party with which we’re identified, we can ask ourselves the question, “how am I being wedged?” If we understand how we are being manipulated by campaigns and media, we can begin to dismantle this manipulation, look more closely at the issues, talk with the people in our lives about them responsibly, and vote according to our policy views, rather than our tribal affiliations.