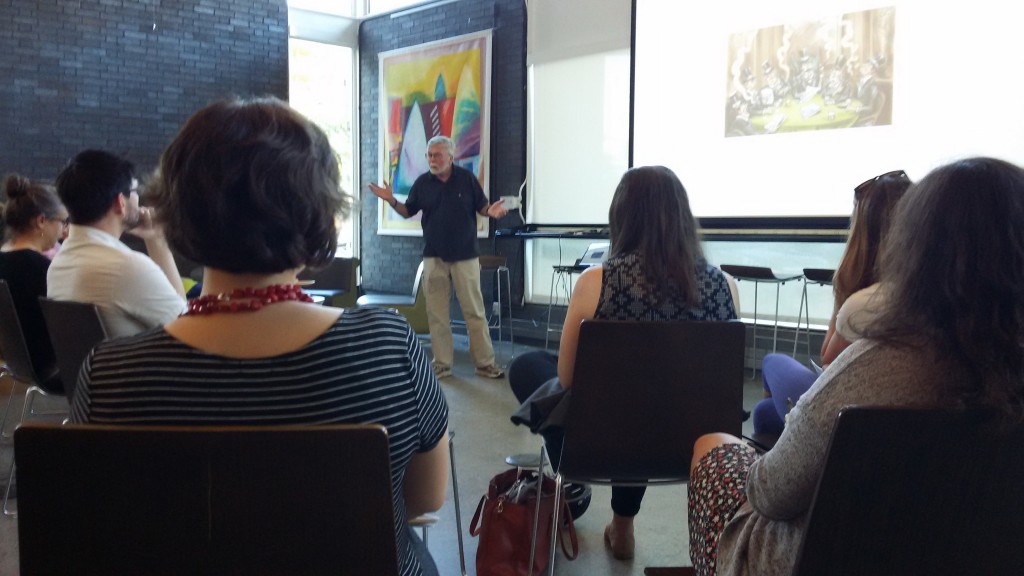 At the start of the evening, Laur introduced Professor Cunningham to the attendees gathered at WorkBar Cambridge, and set the ground rules. There are no dumb questions and this is not a debate. We are all here to learn! With Republican and Democratic National Conventions upcoming, and the presidential elections a few months away, Wednesday’s event provided an opportunity for all in attendance to get their questions answered.

Professor Cunningham began by talking about the history of American elections. Though the founders of the United States disliked the idea of political parties, it wasn’t long before Thomas Jefferson was leading one. Parties became powerful influencers of election outcomes. Until 1968, the delegates to national conventions were chosen by party leaders, leaving young people, women, and minorities with little to no voice. At the 1968 Democratic National Convention in Chicago, protesters made it clear that things had to change, and the first of a series of election reforms were made. Primaries and caucuses, not party leaders, now choose the nominees for president, and since 1972, half of the delegates sent must be women.

How does the process work? In the primary system, each state makes its own rules. Some have caucuses, where people gather together and physically group themselves in their candidate’s corner to be counted. Other states have a standard polling system. Some states are winner take all, while others devote delegates based on the electoral decisions of each particular congressional district. Once the delegates are decided, they are obligated to vote for the candidate chosen by the people they represent. But what about super-delegates? These can vote whichever way they choose, but generally, they vote for the leading candidate in their party.

Despite various reforms, as we see, our system still makes it essentially impossible for a third party candidate to attain the presidential office. The electoral college makes it possible for a candidate to win the popular vote but lose the election. In the presidential election, nearly all states are “winner take all” (excepting Nebraska and Maine); if a candidate wins California, for instance, by one vote, that candidate captures the entirety of the state’s delegates. With the advent of Citizens United, the very wealthy can fund the candidates of their choosing with very little limit, and with the repeal of the Voting Rights Act of 1965, some states are changing their voting laws in order to limit the voting access of women and people of color.