What’s the Deal with North Korea? 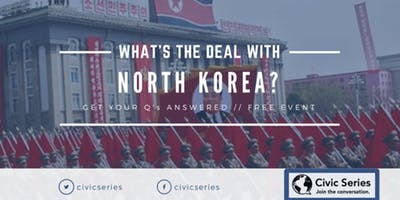 What’s the Deal with North Korea?

North Korea is confusing. It’s a communist country that pretty much keeps its windows shut to the rest of the world. Citizens don’t have basic rights like freedom of speech (earning it one of the top spots on Human Rights Watch’s list of most repressive countries). Their eccentric leader, Kim Jong Un, has a funny haircut and loves Dennis Rodman. Oh, and they occasionally threaten war on the U.S. and other countries by launching nuclear weapon tests in our direction.  Uhh… not cool.

Join Civic Series as we help answer your questions about this mysterious country at this October’s Civic Series event.

Our speaker, Prof. Eugene Y. (Gene) Park, the Korea Foundation Associate Professor of History and the director of James Joo-Jin Kim Program in Korean Studies at the University of Pennsylvania, will give a 30-minute overview, followed by an extended Q&A and discussion. Hang out after the event for drinks, snacks, and good convo.

Civic Series helps you understand, think for yourself, and have meaningful conversations about the most important issues of our time, like Brexit, the Israeli-Palestinian conflict, climate change, and many others. We run free, non-partisan events where you can ask questions of experts and discuss the most important issues of the day. Civic Series is a non-profit organization run by dedicated volunteers in the United States and Canada.

This event is run by Civic Series in collaboration with the James Joo-Jin Kim Program in Korean Studies at the University of Pennsylvania.